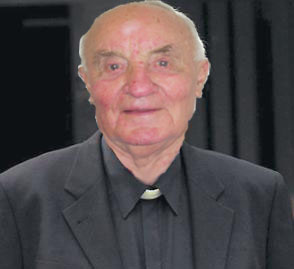 Canon Gerald Donnelly was born in Kiltoom, Co. Roscommon on 3rd November 1918, just as the First World War was coming to an end.

Canon Donnelly was educated at Summerhill College, Sligo, where he completed his Leaving Certificate in 1937. He went from there to St.
Patrick’s College, Maynooth, where he gained a BA degree and then pursued four years of theological studies. He was ordained to the priesthood on 18th June 1944 for the Diocese of Elphin.  He began his priestly ministry in the parish of the English Martyrs at Walworth in the Archdiocese of Southwark while Europe was once again at war. He spent the first eleven years of his priestly ministry there.

Canon Gerry returned to Ireland in 1955 and ministered in Castlerea and Crossna. Following these two short-term appointments, he was appointed curate in St. Mary’s, Sligo in 1956 and then as Administrator in 1970. Canon Gerry was already in his mid-fifties when he took on the ministry of chaplain to the Defence Forces at Custume Barracks in Athlone and he served there until his appointment as Parish Priest of Ballygar in 1981.

In 2001, after 20 years of service to the people of Ballygar, Canon Donnelly retired from active ministry. He continued to live in the parish until 2014, when he moved to the Sacred Heart Hospital Roscommon, where he enjoyed excellent care.  We give thanks to God for Canon Gerry’s 72 years of priestly ministry, in which he gave witness to his faith in Jesus Christ. It was a very full life and Canon Donnelly was as positive about his priesthood at the end of his life as he was on the day of his ordination. Ar dheis lámh Dé go raibh a anam naofa.

Our condolences to his nephews Brendan and Vincent, nieces Martina, Geraldine, Ursula and Bertha and to his grandnephews, grandnieces, relatives, and wide circle of friends.