Father James Tighe died early on the morning of Saturday 19th August 2017 at the Bons Secours Hospital, Galway.  Fr Tighe, was born in 1925 in Rooskey, Co Roscommon and ordained in 1951 having studied at Summerhill College and St. Patrick’s College, Maynooth.

Having served as a priest for 50 years, Fr James retired as Parish Priest of Elphin in 2001. He continued to minister in the parish in a support role as long as his health allowed.

Prior to his appointment to Elphin, Fr Tighe had been PP of Ballinameen, and served as a curate in Sooey and Gleann (Riverstown), Lecarrow (Knockroghery) and Coothall. Like many priests of his vintage his early years of ministry were spent in the UK as a curate in Preston.

Our condolences to Fr Tighe’s family, Vera, Mamie, Vincent, Desmond and extended family and friends.  May he rest in peace. 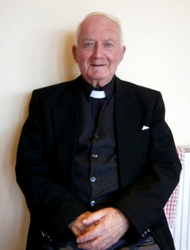