New Community of Sisters for Roscommon

During the past week Bishop Kevin has been to Cantabria in the north of Spain, to finalise an agreement with the Servant Sisters of the Home of the Mother, to establish a new community in the Diocese of Elphin. He had been exploring this possibility with Mother Ana Maria Campo for almost a year and there have been a number of meetings, both here in Ireland and at the Mother-house of the community in Zurita, just south of Santander.  The agreement was signed on Thursday 16th February 2017 and it is planned that the new community of four sisters will be established in Sacred Heart Parish Roscommon on May 13th 2017, the Centenary of the Apparitions of Our Lady at Fatima. The four sisters are:

Sr. Ruth Maria (Leader of the Roscommon Community) who is a native of Dublin

Speaking on his return from Spain, Bishop Kevin said:

“I am really delighted to welcome the four sisters to the Diocese of Elphin. It seems providential that the agreement was signed on a day when the first reading was about the covenant God made with Noah. I am convinced that God is at work in this agreement also. It represents a new beginning, but one which is in continuity with the heritage of faith and service given by so many women religious in our Diocese down through the years. These are four joyful young women of faith, who bring between them forty years or more of living the consecrated life. I am confident that, with their special charism of ministry to young people, they will be friends and spiritual guides for many young women in our Diocese in the years ahead. I want to thank Fr John Cullen and his parish team for their encouragement and their willingness to make this initiative possible.  Please God it will bear the fruit that God wants.”

For those who may be more interested in the technical details, the Servant Sisters are not, strictly speaking, a religious order, but rather an Association of the Faithful. In this they are not unlike the Daughters – or French Sisters of Charity (the “butterfly nuns”). In practice, they live in community just like religious and take the same vows of poverty, chastity and obedience. Their mission in Roscommon will include prayer guidance and retreat ministry with young people, the development of catechetical resources using social media, promoting devotion to the Eucharist and Mary and visiting the elderly who live alone.

You can find out more about the Servant Sisters on: https://www.hogardelamadre.org/en/about-us/servant-sisters 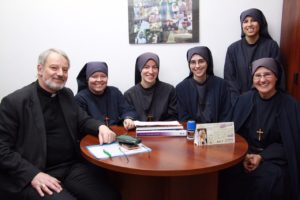