Since his arrival in Ireland as Apostolic Nuncio in January 2012, Archbishop Charles John Brown has always been clearly and recognisably the representative of the Holy Father, first Pope Benedict XVI and then Pope Francis. He came among us as a diplomat, at a time when diplomacy was really needed, but he came with the heart of a pastor. Over the past five years, he has challenged us and encouraged us in equal measure.

I first met Archbishop Brown when he came to visit the staff at the 50th International Eucharistic Congress office, shortly after his appointment to Ireland. During that busy period he was very supportive to us and was ready to do anything he could to help. In much the same way, around the time of my appointment as a bishop, I found him very approachable and encouraging. He has visited the Diocese of Elphin on five or six occasions over the past three years and always seemed to have plenty of time to meet people, young and old alike.

As many people will be aware, Archbishop Brown had to devote a significant amount of energy to the renewal of the Episcopal Conference. In the past five years, eleven Episcopal appointments have been made in Ireland and the process is under way for seven more. This work will have to be completed on someone else’s watch, but that is the nature of the Church. As St Paul says, “I planted the seed in your hearts, and Apollos watered it, but it was God who made it grow”.

While I am sorry that Archbishop Brown will soon be leaving us, I am delighted that the Catholics of Albania, who have suffered so much in the past, will have him among them as the personal representative of Pope Francis. I wish him every blessing in his new mission and hope that he will occasionally return to visit us. 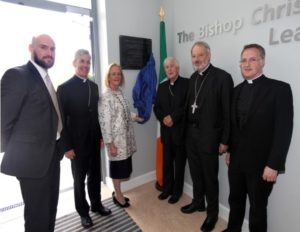 His Excellency Archbishop Charles J. Brown pictured at Summerhill College, Sligo on 18th May 2016 for the opening of the Bishop Christopher Jones Learning Centre at the college.