The first ever ordination of a Permanent Deacon in the Church of Saints Peter and Paul, Athlone took place today, Friday 8th December 2017, at 3pm on the Feast of the Immaculate Conception.

The large congregation gathered, shared the joy of the occasion in a beautiful and uplifting ceremony during which Bishop Kevin Doran ordained Athlone native, Tony Larkin. The ordination liturgy involved Tony’s wife Jean, family members, and children from local primary and secondary schools. There was also a large representation of clergy and laity from parishes throughout the Diocese.

Deacon Larkin is married to Jean. They live at Baylough in Athlone. Retired for some years, he is already well known in the area from his involvement in a large number of church and community related organisations and initiatives. In the New Year, he will be assigned by the bishop to work within the Diocese.

In preparation for ordination as a Permanent Deacon, Tony undertook a four-year, intensive programme of academic study and spiritual, human and pastoral formation based at Saint Angela’s College, Sligo.

Permanent Deacons are men, married or single, who carry out a ministry of service. First and foremost, the deacon is ordained to serve as a visible sign of Christ who came to serve rather than to be served. The work of the Permanent Deacon does not replace that of a priest but rather complements it in full collaboration with that of the laity. The areas of ministry entrusted to deacons include assisting the priest at Mass, celebrating baptism, officiating at the rite of marriage and presiding at funerals. At Mass the deacon will also read the Gospel and may preach the homily. He is called in a special way to minister to the poor, the vulnerable and the marginalised.

The Diocese of Elphin restored the ministry of Permanent Deacon in 2012 with the ordination of six married men to the Permanent Diaconate. All six are ministering in various roles throughout the diocese and make a significant contribution to the pastoral care of the faithful.

Commenting on Deacon Tony’s Ordination Bishop Kevin Doran said: “It would be impossible to understand this particular ‘episode’ in Tony’s life without reference to his wife Jean. She has been an integral part of his journey as he has been a part of hers. His “yes” to the Diaconate is built on their “yes” to one another. In wishing Tony every blessing and happiness in his ministry, I want to take this opportunity to thank Jean especially for the generosity with which she has supported Tony throughout the years of his formation and in making this gift of himself in the service of God and his people”.

Congratulating the newly ordained deacon, his wife and family, the Director of the Permanent Diaconate for the Diocese of Elphin, Rev. Michael Duignan, noted that “Tony’s Ordination as a Permanent Deacon is the first of its kind in Athlone since the very early centuries of Christianity on this island. It brings to seven the number of Permanent Deacons ordained for the Diocese of Elphin in recent years. Already the benefits their particular ministry of service are being felt in a variety of different contexts at parish and diocesan level.”

Speaking after the ceremony Deacon Larkin said: “It has been four years of intense study and time away from home. I want to thank my dear wife Jean for travelling this journey of discernment with me and at all times been there to support me and love me. To my extended family, friends and parishioners Jean and I thank you for your prayers, patience, love and support over the past four years. I am very much looking forward to my ministry in the Diocese of Elphin.”

Preparations are well underway for the Ordination of Martin Reidy from Kiltoom, Athlone, Co Roscommon on Gaudate Sunday, December 17th at the Church of the Risen Christ, Kiltoom. We ask for prayers for him and his family at this important time. 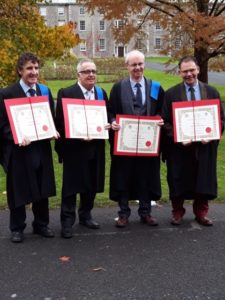