Day for Life 2019 – The Scourge of Domestic Abuse 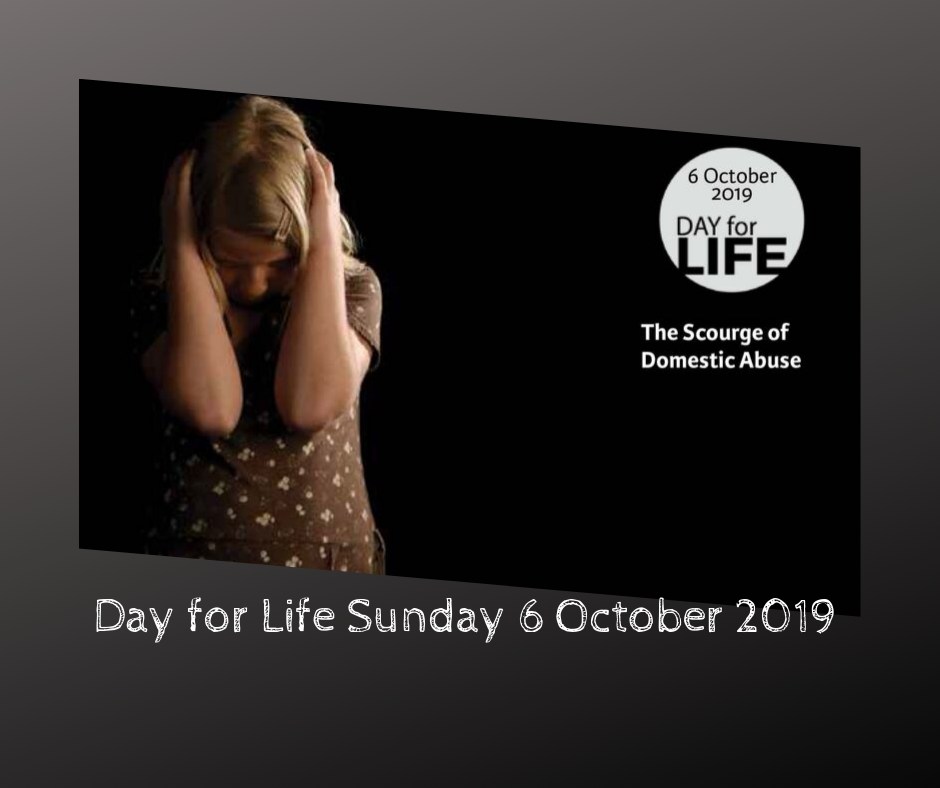 About Day For Life

Day for Life is celebrated annually by the Catholic Church in Ireland, Scotland, England and Wales. It is a day dedicated to raising awareness of the meaning and value of human life at every stage and in every condition.

This year’s Day for Life will be celebrated in Ireland on Sunday 6 October and will focus on the theme: ‘The Scourge of Domestic Abuse’.

‘The Spirit of the Lord has been given to me,
for he has anointed me.
He has sent me to bring the good news to the poor,
To proclaim liberty to captives
And to the blind new sight,
To set the downtrodden free,
To proclaim the Lord’s year of favour.’
Luke 4:18-19

The Catholic bishops of Ireland, England & Wales and Scotland have chosen to focus on domestic abuse as the theme for Day for Life 2019. We wish to raise awareness of the prevalence of this issue across our countries.

Laura’s Story
‘My name is Laura and I am forty-three years old. I have three daughters and a beautiful grand-daughter. During my many years of marriage, I was repeatedly abused by my husband. I had my jaw and teeth broken, and on several occasions was strangled to the point of unconsciousness. Despite knowing that his behaviour was unacceptable, I desperately wanted my marriage to work …’

Read Laura’s story in full below.

An Intolerable Problem
One in four women and about one in six men suffers from domestic abuse in their lifetime. According to a 2018 report2, almost nine out of every ten women murdered in Ireland are killed by a man known to them. This fatal violence is at the most severe end of the spectrum of domestic abuse. Women’s Aid says that the dangerous patterns present in abusive relationships are all too often dismissed and not taken seriously, which can put women at risk of serious assault or homicide.

It is a deeply regrettable fact that men, women and children suffer domestic abuse at the hands of husbands, wives, parents and other family members. Violence of this kind should never be tolerated or justified. It is an offence against the dignity of the human person.

Pope Francis
The Church recognises the hurt done to those who have experienced domestic abuse. As Pope Francis wrote in 2016:

Unacceptable customs still need to be eliminated. I think particularly of the shameful ill-treatment to which women are sometimes subjected, domestic violence and various forms of enslavement which, rather than a show of masculine power, are craven acts of cowardice. The verbal, physical and sexual violence that women endure in some marriages contradicts the very nature of the conjugal union. (Amoris Laetitia, 54)

How can Catholic parishes and communities be places of safety, welcome and assistance?
This is a call to action for our parishes, schools and Catholic communities to reflect, learn and act together, so that we can help those suffering from domestic abuse in our parishes, our workplaces and even in our own homes. Knowing what to look for and spotting the signs means that, individually and collectively, we can make a real difference to people’s lives.

It is time to start talking and taking action. Go to www.dayforlife.org or www.catholicbishops.ie to find out more about what you can do.

On this annual Day for Life, we give thanks to God for the gift of life which he has given us and we ask him for what we need so that we and those around us can life life, free from fear and exploitation, as God intended.

We pray for our families – that we may have the grace to live all our relationships with tenderness and mutual respect, inspired by the Spirit of God. Lord hear us.

We pray for women, men and children who live on a daily basis with the fear of physical or emotional violence in their homes – that they may find peace in a place of safety. Lord hear us.

We pray for families in our society who are without a proper home – that they may soon find a place where they can live their family life without the stress associated with being homeless. Lord hear us.

We pray for our society – that, inspired by the Word of God and by good government, we may rediscover the kind of values that support family life. Lord hear us.

We pray for all who have died, and especially those who have died as a result of domestic violence – that they may be welcomed and loved in their heavenly home with Jesus and all the saints

Heavenly father, these are the prayers of your sons and daughters. We ask you to hear and answer them, through Christ Our Lord. Amen.

Holy Mary, Mother of Love,
holding in your arms, the fruit of your womb,
graciously look upon our earth and remove from it
all that hardens our hearts and dims our eyes
to the preciousness of human life,
from the moment of conception to natural death.

Through the example of your tenderness
teach us the ways of compassion and love
that we may build up the civilisation of love among us
and a society that is truly worthy of the human person.

Help us to reject all that contributes to a culture of death,
and to work with others of goodwill
in promoting the culture of life.

Bring us ever closer to your Son,
so that we may know the fullness of life that he offers us
and come to know that life more perfectly,
with you, and all the angels and saints,
in the eternal life of Heaven.

My daughters experienced a lot growing up due to the fact that my husband was extremely violent towards me. Although he almost never assaulted me in front of the children, they undoubtedly heard an awful lot. They heard things that no child should ever be subject to.

During my many years of marriage, I was horrifically and repeatedly abused in every way imaginable. I had my jaw broken, teeth broken, was strangled to the point of unconsciousness on countless occasions. On one hospital visit, where I had obviously lied about what had happened, I was told that I had whiplash and significant injuries similar to that of a car accident victim.

Despite knowing that his behaviour was unacceptable, I desperately wanted my marriage to work. I was scared 24 hours a day, not knowing when I would be beaten, degraded sexually, or financially and emotionally abused.

When my husband beat me up really badly in front of our then three-year-old daughter, I decided that was enough. I decided that although they had witnessed I was not going to allow my children to be witness to such despicable behaviour, despite them already being witness albeit audibly.

My husband left the family home, but he continued to stalk me and terrorise me for a long time after.

During a weekend contact visit he attacked our then five-year-old daughter. She was black and blue. I felt dreadfully responsible, and I still do. I hadn’t told many people due to feelings of embarrassment and fear, but after this attack on our child I finally gathered the courage to go to the police.

He was arrested and charged with one count of battery against me and 2 counts of ABH – one against me and the other against our five-year-old. The case was sent straight to the Crown Court due to its severity. He pleaded not guilty.

My young child had to be cross examined in court by Barristers and despite her young age she was highly consistent with the accounts she had originally given to the police.
Ultimately, even in the face of extreme evidence against him, including text message evidence where he had admitted these offences and that had been recovered from his phone by police forensics, he was found not guilty on all counts.

The detective in our case worked so hard and despite the not guilty verdict, she ensured that, on the basis of the evidence against him, he did not get his job back. The detective told me that this would be the way we’d get justice.

It was a sort of justice; however, I’d have much preferred him to have been held accountable for everything he did. I felt this to be a sure sign that domestic abuse is not treated seriously enough, even in this day and age.

This was an horrific time for myself and my girls and there was social services involvement for a time due to our ‘vulnerability’. I also still have a marker on my home for our protection and still live in some fear.

Although I know ultimately this was not my fault and that I did not deserve this, I found it difficult to internalise my worth as a person. I was so very, very scared so I can only begin to imagine how this was for my girls. I feel continuous guilt for being too weak to change things. Both for me, and for them.

Although this has been greatly difficult to revisit, I am happy that I can tell my story to perhaps go some way in helping others in any way I can.

Thank you for reading my story, my very real story.

*Names have been changed to protect identity.