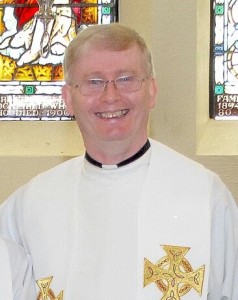 Fr. John Leogue, son of Joseph Leogue and Mary Diffley, was born in Mohill Co. Leitrim in February 1960. He completed his Secondary Education at Summerhill College, Sligo and following studies in Kiltegan, University College Cork where he was awarded a BA in Applied Psychology, Philosophy, English and Mathematics, and subsequently at the Irish College, Rome (Gregorian University) and St. Patrick’s College, Maynooth where he was awarded a BD in Theology, John was ordained to the priesthood for the Diocese of Elphin on 8th June 1986.

Following a number of temporary appointments in Newbridge and Grange, Fr. John was appointed Curate in Ballyrush (Balinafad) in the summer of 1988. He was transferred to the teaching staff of Summerhill College Sligo in 1989, (having previously completed the HDipEd in UCG). During that year he also became Chaplain to the Sligo Unit of the Catholic Boys Scouts of Ireland.

John’s return to full-time parish ministry was not long delayed. In summer 1990 he was appointed Curate at Fuerty in the parish of Athleague and, while remaining in that appointment, became Catechetical Director of Primary Schools for the Diocese of Elphin in 1995. He was appointed parish priest of Athleague in 2002.

Fr. John was a keen statistician and used this gift to assist in financial planning and in making projections for the future of the diocese. Following the death in 2014 of Fr. John O’Rourke, Fr. Leogue took responsibility for the management of the Sick and Retired Priests fund and, in that capacity, offered his assistance to older clergy in making plans for their retirement.

In the time of his own illness, which lasted just over a year, Fr. John demonstrated great resilience and courage, seeking all the time to push back the boundaries which ill-health had placed in his way. As recently as early December he was to be seen regularly in and around Roscommon and keeping his foot in the doorway of ministry. Sadly that door began to close on him in the few weeks before Christmas and he died at the Mater Private Hospital early on Sunday 24th January 2016, surrounded by his sisters Teresa and Mary and his brothers Pat & Michael. Ar dheis lamh Dé go raibh a anam dílis.