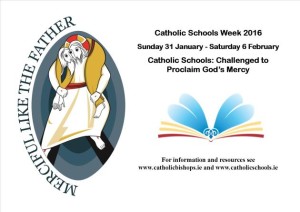 Cathedral of the Immaculate Conception, Sligo

This year Catholic Schools Week challenges us to stop and ask: Along with providing an excellent education:

In the first reading we heard of God calling Jeremiah, appointing him to be “a prophet to the nations” and asking him to “brace himself for action”. (Jer 1:4f) Throughout the history of the people of Israel and the followers of Jesus we see God, over and over again, calling people, appointing them and asking them to “brace themselves for action”.

The year was 1778, the place was Dublin, Elinor Conway the wife of James McAuley had just given birth to their eldest child – Catherine. They had two more children before James died in 1783 leaving Elinor to raise a young family on her own. In 1798 when Catherine was in her late teens her mother died too and the children were cared for by a number of different relatives. Eventually Catherine ended up living with a rather comfortable middle class Quaker family – the Callaghan’s of Coolock House. From an early age Catherine had a lively faith nourished by a rich prayer life. She also had a profound sense of God’s loving mercy towards her and an ever-growing conviction that she, in turn, should care for those who were less well off than herself.

When William Callaghan died in 1822, he left Catherine his entire estate and his life’s savings. By this time she had gathered a group of helpers around her and had organised a variety of initiatives to help the poor and in particular poor women. She felt called by God to do even more and began to consult with clergy and religious sisters as to how she could best help those who had so little and hardly any chance in life. In the beginning, Catherine had no intention of forming a religious order. Nuns in those days spent most of their time cloistered away from the people. Catherine was a hands-on woman.  A women “braced for action”.  She wanted to bring real help to the poor and needy and if she was to do so she needed to be among them so that she could see at first hand the realities of their lives.

Very early on Catherine came to realize the potential of education to transform the lives of the poor. For to be able to read and write could not only transform someone personally and socially but it could also open up for them employment opportunities and the hope of a better life. Likewise the teaching of skills and trades gave people plagued by poverty the opportunity of a way out.  Back then – the poor had no hope of gaining an education except through the charity of others.

In 1824 Catherine decided to use her inheritance to build a house at Baggot Street as a shelter for poor women and a school for poor children. Her plans were not welcomed by all. Soon Catherine was to realize that if she founded a religious order after all – her work for the poor would be on a much firmer footing. She and two friends began training to become nuns and Catherine’s order the Sisters of Mercy was born in 1831. Like the other nuns of her day they took the vows of poverty, chastity and obedience but they also, at Catherine’s insistence, took a fourth vow of “service to the poor, sick and uneducated”. Initially, the nuns wore plain clothes and were known affectionately as the “walking nuns” because they went out to the poor rather than expecting the poor to come to them. The number of Catherine’s companions increased and new houses and schools to serve the poor were opened. On November the 11th 1841 in her mid-sixties Catherine or “Catherine of Dublin” as some call her died of tuberculosis and was laid to rest in the grounds of the Order’s Baggot Street House.

Catherine was convinced of her divine calling and she was not afraid to “brace herself for action” particularly in the area of educating the poor. When it came to the type of education she wanted the sisters to provide she was adamant that at the heart of it should lie education in matters of the spirit, education in the ways of God – education that builds up the whole person mind, heart, spirit and body so that we can be the best people we can possibly be. Generations of generations of women and men in town after town throughout this island and beyond have benefited immensely from the dedicated hard work of the Mercy Sisters and the education they have provided.

Today we begin Catholic Schools Week 2016. A week that each year offers the Catholic Community and in particular those involved in Catholic Education – students, parents an opportunity to reflect upon and affirm the unique richness of Catholic Education. It also offers us an opportunity to emphasize, even in the face of what one might deem a narrow minded hostility, the overwhelming distinctive positive contribution Catholic schools make to the shaping of our future generations and of Irish society in general.

The theme of Catholic Schools Week 2016, takes account of the fact that this year is a Jubilee Year of Mercy in the Catholic Church. It emphasizes Catholic schools as places that, like the Prophet Jeremiah and Catherine McAuley are called and appointed in their own way “to proclaim God’s mercy” and to be “braced for merciful action.”

We have heard from St Paul in the second reading that: “Love is always patient and kind; it is never jealous; love is never boastful or conceited it is never rude or selfish; it does not take offence, and is not resentful. Love takes no pleasure in other people’s sins but delights in the truth; it is always ready to excuse, to trust, to hope and to endure whatever comes.” (1 Cor 13:4f)

One of Catherine McAuley’s deep down convictions was that God’s love is a merciful love that never gives up on people no matter what. It is this merciful love without bounds that Christians should show in a real practical way to those most in need. It was this idea that Catherine wanted to flood the hearts of her Sisters of Mercy. It was this idea that she wanted to be poured into the schools where they worked and to fill the lives of the students that they taught.

In a world where – retribution and punishment rather than forgiveness is often favoured – were a lock them up and throw away the key attitude is common place – where mercy is aligned with weakness – I think that more and more we need to be challenged by the message of God’s mercy and be emboldened to practice mercy in our dealings with each other.

One of the resources for Catholic Schools Week 2016 asks “what does mercy look like in action” and it answers “it is forgiveness, compassion, understanding, support, a listening ear, non-judgement, love and gentleness.” This year Catholic Schools Week challenges us to stop and ask: Along with providing an excellent education:

I have no doubt from my experience that the vast majority of Catholic Schools are such loving and merciful places that not only teach mercy but where management and teachers, staff and students, policies and procedures model it as well.

Two of Catherine McAuley’s famous sayings are “we can never say it is enough” (Familiar Instructions, p. 2) and “the simplest and most practical lesson I know is to resolve to be good today but to be better tomorrow.” (Letter to de Sales White, February 28, 1841). This Catholic Schools Week it is good to remind ourselves of the particular calling of Catholic Schools. It is good to challenge ourselves and our school communities to listen to the message of God’s loving mercy. It is good to recommit ourselves to being educators in the ways of mercy and like Catherine McAuley to be ever-braced for merciful action in our dealings with each other and especially in our dealings with those most in need. Amen.