Seven or eight years ago, I bought a piece of software for my computer called Adobe Acrobat. For those of you who are not familiar with it, Acrobat is a computer programme for creating and editing secure documents. I have found it very useful over the years, but recently it started causing me problems. More than once, having spent a few hours working on a document I found it couldn’t be saved.

One day a message popped up to tell me that this version of Adobe Acrobat was no longer being supported. I was invited to upgrade to the latest version. All I had to do was click on a button, fill in a few details and I was nearly done. But then there was the little matter of an annual payment by credit card. I’m sure most of us have had this experience with a computer, or a mobile phone or some other form of technology.

My first reaction was to say to myself “there must be some way around this”; “I’ll get it sorted myself”. I resisted for a few weeks, but it gradually became clear to me that there was no salvation without making the commitment. On Thursday evening, I finally gave in and paid the price. Within a few seconds the big red “X” on my screen became a reassuring green “tick” and my new version of Adobe Acrobat kicked into life. You may wonder what that has to do with Easter, but I’ll come back to that later on.

The heart of the message is that God the Creator, who has loved us from the beginning, had compassion on us and sent his Son to free us from the power of sin and death, through laying down his own life. Now he is forming us into a new creation through his Holy Spirit. This is what all our readings are about this evening, including the ones we have not listened to this year.

Our first reading this evening is all about the loving plan of our Creator God, who brought into existence a world which is teeming with life and energy. It is a world in which “everything is connected”, as Pope Francis reminds us (LS 91). After each part of the story, we hear, almost like the chorus of a song, that, “God saw that it was good”. Pope Francis goes on to say that God’s plan includes the creation of humanity, in his own image. In other words we are created for relationship with Him. “This shows us the immense dignity of each person, who is not just something, but someone” (LS 65).

According to Pope Francis Pope “the creation accounts in the book of Genesis suggest that human life is grounded in three fundamental and closely intertwined relationships: with God, with our neighbour and with the earth itself. According to the Bible, these three vital relationships have been broken, both outwardly and within us” (LS 66). That is the meaning of sin; the frustration of God’s plan. It’s a bit like when my Adobe Acrobat no longer works the way it was intended to.

If we are to understand the next reading from Exodus, we need to see it as part of a much bigger story of how the children of Israel ended up as slaves in Egypt. The passage we heard this evening is the beginning of an epic journey through the wilderness. The red “X” on the doorposts of their houses will eventually become the green of the promised-land, a land flowing with milk and honey. It is a triumphant and joyful moment, which is commemorated every year in the Jewish Feast of Passover. It marks the beginning of a new and better “version” of God’s people.

But like me sitting in front of my computer screen, the people of Israel prevaricated. They didn’t want to go back, but the way forward was difficult. They sat in the wilderness and grumbled. They were, as the Lord said to Moses “a stiff-necked people”. At times, it seemed that God himself must lose patience with them, but no. He remained true to his promise.

We don’t often listen to the reading from Baruch at the Easter Vigil. It comes from another time of exile, when the people of Israel found themselves in captivity in Babylon. Baruch invites them to reflect on how they came to be there in the land of their enemies. He suggests that they had “forsaken the fount of wisdom”. The prophet Jeremiah uses a similar image when he says:
[My people] have forsaken me, the spring of living water,
and have dug their own cisterns,
broken cisterns that cannot hold water. (Jer. 2:13)
In other words they had lost their sense of direction, which came from being the people of God. Baruch invites the people of Israel to recommit, so that they can once again have life and light and length of days in their own land.

In any society, when the priorities of individuals take precedence over the common good, the essential relationship of trust breaks down and the structures of society are weakened. As we listen to this reading, we might ask ourselves about the priorities we have for our own society. Has our “operating system” become deformed because spin has taken the place of truth, or because we set more store on being clever than on being wise. Baruch’s invitation to the people of Israel is: “listen to commands that bring life”. That same invitation is given to us today.

We listened to two readings from the New Testament, one from St. Paul and the other from St. Mark. Like the little message that popped up on my computer screen last week, these readings bring us the good news that there is a solution to all that is broken in our lives and in our society. This solution, of course, is not a programme, it is a person; Jesus Christ.

The good news comes in two parts. The first part is an amazing fact of history. Jesus who died is risen. The story, as told by St. Mark is simple and uncomplicated. The women came; they saw the stone rolled back. Instead of the body of Jesus, what they found in the tomb was a young man in a white robe. He entrusted them with the message that Jesus would meet them in Galilee, back where it all began. The sun may have been only rising, but the Son of God had already risen.

Like every human story, there is the moment when everything falls into place. For the disciples on Easter morning the good news was that Jesus is alive, but very quickly they began to see that, if He had risen as He promised, then His promise of eternal life for all who believed in Him was also a reality. This is a very strong theme in all the writings of St. Paul.

In the early years of Christianity, it was the usual practice for Christians to be immersed from head to toe in the waters of Baptism. For St. Paul, that was a powerful symbol. Going down into the water was like going into the tomb with Christ; dying to the old way of life. Coming up out of the water, then, Christians were filled with the new life of Baptism. This is what we celebrate in every Baptism. Even without physical death, we already begin to live the new life of the Resurrection.

How is this possible? Well, bear with me if I go back once more to Adobe Acrobat. As I said at the beginning, there is always the little matter of a price to be paid. In our case, however, Jesus Christ has already paid the price for us, through his own life of self-giving and service and through his death on the cross. Never before, in the history of humanity, has anyone been so close to the Father. Never before has anyone responded so generously and completely to the Father’s love – and He is one of us. We were unable to save ourselves, but he has brought about our salvation. The “heavy lifting” has been done. Paul’s message to us is that “if in union with Christ, we have imitated his death, we shall also share his Resurrection”.

Jesus said, I have come that you may have life and have it in abundance. Today, He wants to share with each one of us the new life of the Resurrection; a life that conquers death forever. It remains for each one of us to accept the gift; to choose life. This is not just about the future; it is about the here and now. As Jesus said: “the kingdom of God is already within you”.

As we look forward to the World Meeting of Families and a visit from Pope Francis, my prayer for you and for your families and for our whole society is that we would be filled with all the hope and the blessing of this season of new life and fresh beginnings. 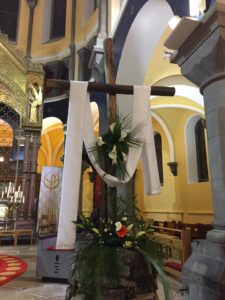