Homily of Bishop Kevin at Sunday Mass in Ballymoe

The image painted by Jesus in this morning’s gospel seems, at first sight, very far removed from the structured society in which we live and earn our bread. It would be easy enough for us to imagine a scene like this in a third world country, where employment is largely unregulated and where little or no provision is made for benefits and pensions. Fifty years ago, however, the “hiring fair” was actually part of the real life experience of Irish workers in England and Scotland, who turned up day after day on construction sites or potato farms in the hope of being selected for a day’s work. Families all over rural Ireland depended on a system which was loaded in favour of the employer.

While the social structures have changed quite significantly, attitudes have not changed all that much. Workers negotiate hard for better pay and they don’t always take into account the needs of their fellow workers, in other industries or on different grades. Large corporations tend to reduce staff to the level of what Pope John Paul used to refer to as an impersonal “workforce”.

In the parable we have just heard, the approach taken by the employer seems strange to say the least. Why does he create hassle for himself? But if we look back in to the ancient tradition of the people of Israel, we find that this was not so strange at all. The law of Moses contained many provisions which, in a world where there were no economic safety nets, helped to restore the balance between rich and poor, slave and free. The law of the sabbath and the law of the jubilee, were all about ensuring that people had what they NEEDED, rather than just what, on a superficial level, they seemed to DESERVE.

Those ancient traditions in the law of Moses, were rooted in the belief that a just society should reflect the care of God for all his people. The law of the sabbath and the law of the jubilee, together with the teaching of Jesus and the life style of the first Christians provide the basis for Catholic Social Teaching, which is sometimes described as “our best kept secret”. Christians don’t have a monopoly on justice, but we do have a rather unique way of promoting Justice and human rights, which is not just social policy but Gospel vision.

The Scripture readings today, it seems to me, are not just about us and our society. They are about The Lord who is rich in mercy and compassion. We are encouraged to seek him, while he is still to be found. We are encouraged to abandon our own ways and to adopt his instead. This is what it means to say that “the Kingdom of Heaven is like a landowner….”

In his writings, especially the letter to the Romans, St. Paul frequently makes reference to the contrast between the pagans who have been saved through faith in Jesus and his own people, the Hebrews, who have rejected Christ and who seem to have lost the promise. The ones who came at the last minute, as it were, seem to do better. But Paul is convinced that the time will come when God’s chosen people, those who have borne witness to him down through the ages will also accept the good news and be saved. It is the will of our Heavenly Father, like the landowner, that everybody should be looked after.

The difficulty is the human tendency to take God’s gift to us for granted and to forget about the others who “come at the eleventh hour”. A hundred years ago in Omaha, Nebraska, there were many “good living” people whose own sense of entitlement was so strong that they found it impossible to believe that children living rough in the streets could have any place in civilised society, let alone in the kingdom of God. The common attitude was that, if people were poor or homeless, it was probably because they were lazy or lacking in initiative. That attitude is not gone away.

Quite often, when we talk of Fr. Edward Flanagan’s mission, it is about his outreach to homeless children who were in trouble. I think we might be missing something, however, if we don’t also see his establishment of Boystown as a way of preaching the Gospel to the citizens of Omaha. By establishing a place of welcome and learning for Boys, a society which operated according to the spirit of the Gospel, he was calling the whole of Omaha to conversion.

A hundred years later, in our society, where many families are homeless and where refugees live in direct provision without the possibility of any kind of family life, his words and his actions are completely consistent with the Social Teaching of the Church, calling us as a society to conversion.

Many Catholics give generously to charities. I have just one simple question that I want to leave with you. Why are we Catholics, who claim to believe in Jesus Christ, apparently unwilling to engage in social and political action to change unjust social structures? Why are we so slow to hold our government and the leading figures in our economy to account for the abject poverty in which so many families live today? Why are we not out in the streets? Is it because it’s too much trouble, or are we simply afraid that, somehow, the solution might cost us more than we are prepared to pay?

Today’s Gospel is difficult, because it calls each one of us to let go of his or her sense of entitlement and to recognise the need of others who live among us, but who have no voice. Later this morning, we will bless a cedar-wood carving which represents the compassion of Fr. Flanagan, whose commitment to the unique value of every human life inspired him to create a safe space for “little acorns to grow into great oaks”. May we do likewise in our own society. 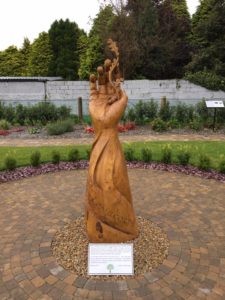 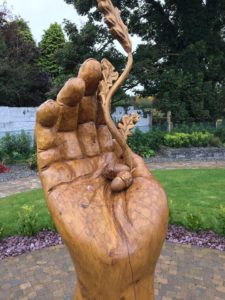 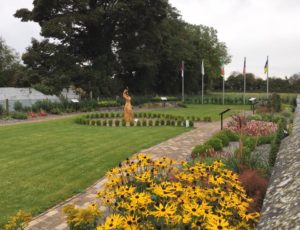 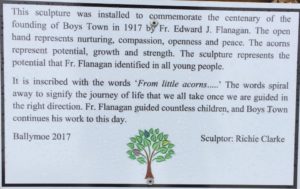