The new school crest for the planned amalgamated school for West Athlone & South Roscommon was launched last week. 5th & 6th class pupils of Brideswell National School, Co Roscommon were delighted to hear that they had won first prize in the competition to design the crest. All primary schools in the catchment area of St Aloysius College and St Joseph’s Summerhill participated in the competition in recent months. Fr John Cullen PP and Canon Liam Devine announced the winners on a surprise visit to the school. Fr Hugh Lee (Chairperson), Carmel Kelly (Principal), teachers and pupils were presented with a Samsung Tablet by secondary principals Mr Gerry Kinneavy and Mr Liam Nally.

The pupils were praise for their creativity and attention to detail. The crest is now being prepared to be added to the new school uniforms for 1st year students of both secondary schools from 1st September this year. The school will amalgamate into a new school “Coláiste Chiaráin” from 1st September 2017. The combined teaching staffs at their year-end meeting also welcomed the new crest. The teachers have been meeting regularly to plan for the new school. 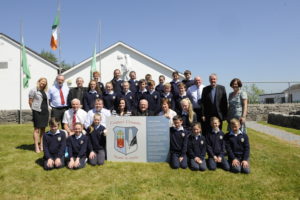 Naomh Ciaráin was born in Fuerty Co. Roscommon and founded the monastery in Clonmacnoise. The crest for Coláiste Chiaráin combines the two pillars on which the school is founded : a Catholic ethos and excellence in teaching and learning. The religious background of the school is seen in the Elphin diocesan crest on the left, and the academic focus of the school is seen in the open book and quill. These are united in the round tower associated with the school’s patron. The round tower is a uniquely Irish building which acted as a store house for the treasures of faith and learning of the great Irish monasteries. The Motto chosen for the school, in keeping with the school name, is “as Gaeilge” : Our motto then means: ‘Strength in coming together’. 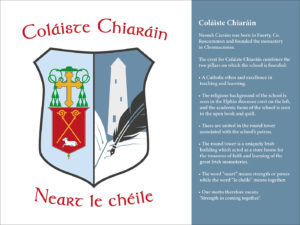 The need for the new school, which will be on the 30 acre Summerhill site is essentially two-fold – the need for a top-class, modern, educational facility in West Athlone / south Roscommon, and the fact that due to increasing enrolments at Primary School level, 600 new post-primary school places will be needed in the Athlone area over the next 5/8 years. It is to cater for this demand that the project is moving ahead at a rapid pace.

Coláiste Chiaráin will be in a campus setting, with the most modern educational facilities, and a full range of subjects and programmes to cater for all students. It has been confirmed that Metalwork will be available in the new school from September 2017. Students taking this subject will be able to continue on to take Engineering in the Leaving Certificate. This will be in addition to Technology, Design & Communication Graphics and Building Construction ( Woodwork).The Project Committee has also applied for funding for a unit to cater for children on the Autistic Spectrum (ASD), to link with the ASD unit in the adjoining St Joseph’s Primary school. The modern Physical Education facilities will consist of 1000 sq ft, and outdoor sports facilities will include football, basketball etc. Local sports clubs have already pledged co-operation. A new interim Board of Management is currently being appointed – one of its first tasks will be to appoint a new principal in early 2017. 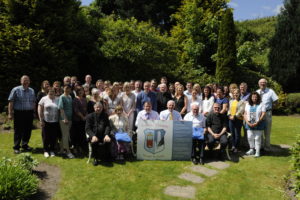