The National Grandparents Pilgrimage takes place in September each year at Knock Shrine. It is one of the busiest, most well-attended pilgrimages of the year. Organised by the Catholic Grandparents Association, the pilgrimage recognises the important role that grandparents play in family life by passing on and nurturing the life-long gift of faith in their grandchildren.

This special day of thanksgiving and celebration brings generations of families together from all over the country.

Since it began in 2002, the pilgrimage has prompted thousands of prayers for grandparents through the Children’s Prayer Appeal, a beautiful collection of prayers for grandparents written by grandchildren. In previous years the prayers would adorn the sanctuary at Knock Basilica, complementing the colourful plaques and flags and that could be seen during the opening procession.

This year, due to Covid-19 restrictions that are currently in place, the National Grandparents Pilgrimage will be held online where all can come together virtually, not only from Ireland but from all around the world.

Grandparents and their families everywhere are invited to take join with us online to celebrate this special day together.

Catherine Wiley, founder of the Catholic Grandparents Association said “This year, more than ever it is important for us to recognise the invaluable role that grandparents play in family life and in society. This has been an incredibly difficult year for so many grandparents around the world who have been isolated from their families, unable to enjoy the usual family celebrations or everyday contact which we would normally take for granted. The pilgrimage is a wonderful opportunity to make them feel cherished and valued.”

The National Grandparents Pilgrimage will be streamed live on the Knock Shrine website at www.knockshrine.ie/watch as well as on Facebook @KnockShrine 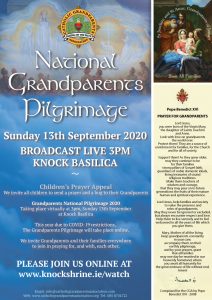