Ordination of Martin Reidy as a Permanent Deacon

An Historic Occasion
The first ever ordination of a Permanent Deacon in the Church of the Risen Christ, Kiltoom, Athlone has taken place at 12 noon on Gaudete Sunday, 17th December 2017.

The large congregation gathered, shared the joy of the occasion in a beautiful and uplifting ceremony during which Bishop Kevin Doran ordained local man Martin Reidy. The ordination liturgy involved Martin’s wife Anne, his son John and daughter Orlaith, extended family members and a large number of the local parish community.  There was also a large representation of priests, deacons and laity from parishes throughout the diocese and beyond.

Deacon Martin Reidy
Deacon Reidy is married to Anne O’Sullivan. They live at Hudson Bay, Kiltoom on the outskirts of Athlone.  They have two children – John who travelled from Aberdeen for the ceremony and Orlaith who travelled from Abu Dhabi. For many years Martin worked with the Irish Defence forces based at Custume Barracks, Athlone and now works as a solicitor specialising in capital taxation, property and property taxes in the long-established firm of Mellotte O’Carroll, Pearse Street, Athlone.  In the New Year, he will be assigned to his ministry by the Bishop within the diocese.

Formation Period
In preparation for ordination as a Permanent Deacon, Martin undertook a four-year intensive programme of academic study and spiritual, human and pastoral formation based at Saint Angela’s College, in Sligo.

The Permanent Deacon
Permanent Deacons are men, married or single, who carry out a ministry of service. First and foremost, the deacon is ordained to serve as a visible sign of Christ who came to serve rather than to be served.  The work of the Permanent Deacon does not replace that of a priest but rather complements it in full collaboration with that of the laity. The areas of ministry entrusted to deacons include assisting the priest at Mass, celebrating baptism, officiating at the rite of marriage and presiding at funerals.  At Mass the deacon will also proclaim the Gospel and may preach the homily.  He is called in a special way to minister to the poor, the vulnerable and the marginalised.

The Diocese of Elphin restored the ministry of Permanent Deacon in 2012 with the ordination of six married men to the Permanent Diaconate. All six are ministering in various roles throughout the diocese and make a significant contribution to the pastoral care of the faithful. On December 8th last, the ordination of another Athlone man, Tony Larkin, brought this number to seven.

Comment
Commenting on Deacon Reidy’s ordination, Bishop Kevin Doran said: “Among those who were inspired to proclaim their faith in Jesus, because of their experience of how He lived and how He died, were a number of experts in Jewish Law and at least two Roman Centurions. Deacon Martin, as a solicitor and a former army officer, follows in that tradition. As a peace-keeper in the Middle-East, he has literally walked in their footsteps. He has seen for himself, how families and whole communities are, still today, impoverished and made vulnerable by the abuse of power, just as they were in the time of Jesus. This experience touches directly into his ministry as a deacon which includes a commitment to the service of those who are at risk of being marginalised in the Church and in Society. I welcome Deacon Reidy among the clergy of the Diocese of Elphin and I want to express in a particular way my appreciation to his wife Anne and to his son and daughter, John and Orlaith, for their willingness to support him in the commitment that he has made today, in the service of God and of the Christian community”.

Congratulating the newly ordained deacon, his wife and family the Director of the Permanent Diaconate for the Diocese of Elphin, Rev. Michael Duignan noted that “Martin’s Ordination as a Permanent Deacon is the first in the Parish Church but not the first for the Parish of Kiltoom. Deacon William Gacquin has been ministering for the last five years in Curraghboy Church. It brings to eight the number of Permanent Deacons ordained in the Diocese of Elphin. Already the benefits of their particular ministry of service are being felt in a variety of different contexts at parish and diocesan level.”

Local Parish Priest, Father Michael McManus highlighted the “privilege it is for the parish to host Martin’s ordination in our local church here in Kiltoom”. He thanked all who were involved in the preparations for the ceremony and the celebrations afterwards and wished Martin, Anne and their family all the best for the future. Speaking about Deacon Martin, Father McManus said, “Martin is a thoughtful man of faith who will bring to his ministry as Deacon a variety of gifts that will benefit greatly all those who encounter him.”

Speaking after the ceremony Deacon Reidy said: “The ordination is a wonderful occasion for our local faith community. The support at parish level has been outstanding. The participation of as many parishioners as possible in the liturgy has been important for me.  Ní neart go cur le chéile.  Mile buiochas.” 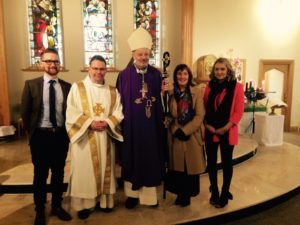