The Lord always finds a way to speak to us through his Word. All of this week the first reading has been from the Book of Genesis and today the reading invites us to reflect on the mystery of sin.

People often speak of the apple tree in this story of the sin of Adam and Eve, but there is no apple tree. The Book of Genesis refers to the tree of the knowledge of good and evil. The heart of the story is that the man and woman were tempted to think that they could determine what was good “for them”, without any reference to God’s plan. The heart of all sin is the arrogant attitude that says “I can do what I like”. That arrogance is to be found in a particular way in the abuse of children and in the attempt to justify it and to explain it away.

There are two other images which strike me from the same reading. We are told that the serpent (the symbol for the evil spirit or Satan) is subtle. Another word might be devious. Many of us would be aware that the very same deviousness is very often at the heart of the reality of child abuse. Perpetrators tell lies to gain trust and then seek to cover up their abuse with more lies, often leaving children with the feeling of responsibility and guilt for what has happened. When child abuse occurs, adults are always responsible.

The other image is the image of “being naked”. We might immediately make the connection between this and the physical and emotional vulnerability of children in the context of abuse. That would be a valid enough comparison. But there is another message in this image of being naked. The man and woman, we are told, when they heard the Lord walking in the garden in the cool of the evening, realised that they were naked and they tried to hide.  But there is no hiding place from the truth. God always knows what is in our hearts. As my grandmother used to say: “Be sure your sins will find you out”.

Today, as a community, we ask forgiveness for the reality of child abuse in our society and we acknowledge once again that it was a reality in our Church and that, whether through ignorance or through a concerted effort to cover it up, it was not always responded to in the way that it should have been.

At the end of his visit to Ireland in August, Pope Francis said to the Irish Bishops: “In recent years, you as a body have resolutely moved forward, not only by undertaking paths of purification and reconciliation with victims and survivors of abuse, but also, with the help of the National Board for Safeguarding Children in the Church in Ireland, you have set in place a stringent set of norms aimed at ensuring the safety of young persons. In these years, all of us have had our eyes opened – painfully – to the gravity and extent of sexual abuse and the abuse of power and conscience in various social settings. In Ireland, as elsewhere, the honesty and integrity with which the Church chooses to confront this painful chapter of her history can offer an example and a warning to society as a whole. Continue on this path”.

It is certainly true that a huge amount has been done in the Church to strengthen the protections against child abuse. In that sense, we can say that the Church has moved on. But today is about recognising that, for many who have been hurt, it is not so easy to move on. The abuse may have ended long ago but the hurt remains. The lighting of our candle in a context of prayer is about entrusting them and their family members to God for healing in body, mind and spirit. It is about renewing our own commitment to be light rather than darkness.

Next week, Pope Francis will host a meeting in Rome to which he has invited, among others, the President of every national Conference of Bishops. The purpose of this meeting is to explore the challenge of the protection of minors in the Universal Church with the intention that the same standards of protection and of openness would apply in every country where the Church is present. I ask all of you to remember the work of this meeting in your prayers. 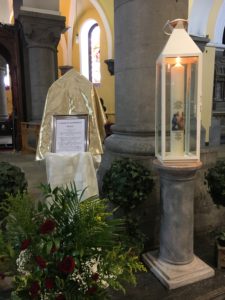 Candle of Atonement at Sligo Cathedral, lit by Bishop Kevin on 15th February 2019