The recipients of the award were two teachers from the college: Mr Kenny Donagher and Mr Shane Reynolds in recognition of their conception and oversight of the development of the Count John Mc Cormack Studio at the College and the recording and production of the album of student performances – “The Hill is Alive”.

This development at the College not only recognised but supported the renowned tradition of music that runs deep into the history of Summerhill College. A tradition that from classical to rock, from folk to traditional Irish has always produced students who have eventually excelled at their craft. One has only to mention Count John Mc Cormack himself, Seamie O’Dowd and groups such as Westlife.

Mr Donagher and Mr Reynolds gave unending hours of their own free time and expertise to the project which now provides a state of the art recording space for students. At the same time, its existence and operation vividly shows that Summerhill College values, supports and rewards this distinctive set of musical talents and the creativity involved among the student body as a whole.

The project clearly demonstrates lived “commitment to contributing to the life of the college community in a practical manner which focuses on living out the Gospel of Jesus Christ by being guided by the school’s motto “to be doers of the word” (James 1:22).” For making the dream a reality Mr Donagher and Mr Reynolds are worthy recipients of this first ever Father John Leogue College of the Immaculate Conception Ethos Award and are fine examples of the dedicated work such an award desires to reward and inspire among the Summerhill College Community. 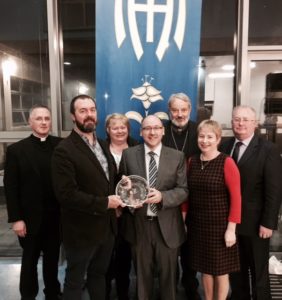 Pictured with Bishop Kevin Doran, Mr Donagher and Mr Reynolds are Fr Michael Duignan, Chairperson Board of Management and Fr John Leogue’s sisters, Mary and Teresa and his brother Pat.