Fr Raymond Browne, known to his friends as Ray or Remy, was born on 1st September 1928 in Sligo, but served most of his sixty six years as a priest, “south of the Curlews” in Co. Roscommon. Having completed his secondary education at Summerhill College, Ray went to St. Patrick’s College, Maynooth in 1947 and, on completion of his formation, was ordained to the priesthood for the Diocese of Elphin in 1954.
Like many newly ordained priests at the time, due to the very large numbers of ordinations for Irish Dioceses, Fr Browne spent his first years as a “guest priest” overseas. In his case, it was in Calabar, Nigeria, which must have seemed very far away in the 1950’s. Ray worked in three teacher-training colleges in Uria, Ediene and Anua.
On returning to Ireland in 1958, Fr Ray was appointed curate at Drumboylan in the parish of Ardcarne, where he remained for fourteen years. From there, he went as Curate to the Sacred Heart Parish, Roscommon Town, where he served for another fourteen years. His next move was just a short distance – four miles – to Fourmilehouse, in April 1986, when he became Parish Priest of Kilbride. He was to spend a total of thirty-four years there, twenty nine as Parish Priest and five as Pastor-Emeritus (or “Grandfather”) of the Parish. While he was, theoretically, in retirement for the last five years of his life, Fr Ray didn’t know the meaning of the word, but continued to exercise an active pastoral ministry and like many priests, adapted to the use of modern technology during the COVID-19 pandemic.
Though small in stature, Fr Browne had a big heart and this was demonstrated time and time again in his commitment to community development, both in his own parish and far beyond. His interests extended from housing for the elderly to the care of people with disabilities. He was National Chairman of Muintir na Tíre from 1963-1967 and was awarded an Honorary Masters in Community Development from NUIG in 2009. He always took a particular interest in encouraging the active engagement of young people in the life of the parish.
Fr Ray had a deep devotion to Mary, the Mother of God and showed considerable flexibility when it came to places of pilgrimage. He was a regular participant in the Diocesan Pilgrimage to Lourdes. At the age of ninety, during one of the hottest Summers for many years, he led a pilgrimage from Kilbride to Fatima.
Fr Browne died, after a short illness, on 25th November. He is survived by his sister, Louise, his brother Aidan, his brother-in-law Padraig and his nephews and nieces. A dheis lámh Dé go raibh a anam dílis. 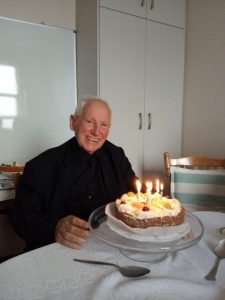 I am very conscious that, as well as the twenty five of us who are here in the Church, there are a great many more participating in this funeral Mass, all over the Diocese and indeed all much further afield. Even without the COVID restrictions, there is no way that this Church could hold the many people who would want to be here to give thanks for the life of Fr Ray Browne.

Through his sixty five years of priestly ministry, Fr Ray touched the lives of a great many people, often possibly without even knowing it. In the four years he spent in Calabar, or the fourteen years in Drumboylan, or the other fourteen years in Roscommon Town and his almost thirty four years in Kilbride; how many of you has he brought to life in the waters of Baptism. He has Baptised your children too. He has celebrated your first Communions, your marriages and the funerals of your family members and neighbours. It is one of the great privileges we have as priests, to be involved in the lives of so many people. People often think of priests as men who live alone, but the life of a priest, properly understood, is all about relationship. Relationship with God and relationship with God’s people.

As you all know. Fr Ray had a finger in many pies. He was a preacher and a sacramental minister, but he had a deep life-long commitment to building community. His vision included the young and the elderly, people with disability and people who didn’t want to go all the way to Roscommon for a newspaper and a carton of milk. Most of all, he wanted to facilitate the participation of others. As I was thinking about the parable of the bridesmaids, it struck me that he could have been the eleventh bridesmaid , the one who not only had enough oil for his own lamp, but who had arranged a delivery of oil for all the others, so that everyone could go into the banquet together. I suppose that is what being a good shepherd is all about.

In my own experience of him, Fr Ray had a habit of gliding gently into the middle of a gathering. But you always knew he was there. He was a small man, but a big presence. Now he has slipped out, just as quietly as he used to slip in and of course you are sad. How would you not be sad?

Our first reading from the book of Revelation, puts our sadness in perspective. “Happy are those who die in the Lord. They can rest after all their labours”. Ray would not have been unduly bothered at the thought of dying, because his focus was always on the Lord. As you know, he liked nothing better than a pilgrimage and, in the final analysis, life is a pilgrimage with its own unique destination.

One day, about a year after I came to the Diocese, I paid a visit to Fr Ray, to chat with him about the his own future and the future of the parish. I wondered if he had considered retirement and, quite clearly, the question had never crossed his mind. I said: “do you not sometimes feel that you need a rest from all this“. “Oh, if I need a rest“, he said, “I just go up and lie down for an hour“. Somehow, I think it will take him a while to get used to the idea of eternal rest.

The Book of Revelation tells us that, when people die “in the Lord” their good deeds go with them. I’m sure that is true, but when someone dies “in the Lord” there is always something that remains, something that inspires those who follow after. Our second reading is from a Letter, addressed to a young Christian called Timothy. It seems that St. Paul knew Timothy’s mother and his grand-mother and both of them were women of deep faith. Paul had seen that same faith in Timothy and invited him to share in his ministry. Now, as Paul comes to the end of his time on earth, Timothy is beginning his ministry as Bishop of Ephesus. Paul encourages him to always choose the right course, to be brave under trials and to make the preaching of the Gospel his life’s work. It must have been important for Timothy to have the example and inspiration of Paul’s life.

All of us can learn from the example of those who go before us on the path of discipleship. We build on the foundations others have laid. Or, as St Paul himself once said, “one sows the seed, another waters and God gives the growth”. Just as Timothy could be inspired by Paul, so perhaps, each of us can ask today if there is something about Fr Ray’s pastoral energy, or his encouragement of young people or some other think which might inspires us in our own discipleship. Perhaps some of us, like Timothy, whether we are fifteen or fifty, are called to take on the mission of pastoral leadership for those who are coming come after us.

One last thought. Modern Bridesmaids are busy people. They are not just meant to stand around and look good. In the run up to the wedding, there are all sorts of jobs to be done. A bride needs someone she can depend on; someone who will stay calm in a crisis and who is not afraid of a bit of work. But most of all, perhaps, the bride needs someone who will be there for her. The parable of the bridesmaids, which we heard in the Gospel reading is not all about running around doing things. It is all about being ready to welcome the Groom when he arrives. It is about being present. There must be some element of that is the life of every Christian. We are called to stand ready to welcome the Lord when he comes, and in whatever way he comes, in our lives. For all his own human frailty, a priest is meant to provide his parishioners with oil for their lamps. He does this through the Word of God and the Eucharist and by walking with them, even through the valley of darkness. Fr Ray may have gone into the wedding feast ahead of us, but his lamp has not gone out. It is burning brightly here in this community and it is entrusted to you, as we say in the liturgy of Baptism, “to be kept burning brightly”.

It is important, I think, to remember, that priests come from ordinary families and in many case it is in their families that their vocation and sense of mission first take shape. This morning, on behalf of all of the parishioners here in Kilbride and all of us in the Diocese, I offer our sympathies to Fr Ray’s sister Louise and his brother Aidan; to his brother-in-law Paddy and to his nieces and nephews Mary, Vincent, Rosemary, Larry and Louise and his many grandnieces and grandnephews. I want also to convey the sympathies of the Kiltegan Missionaries with whom Ray worked in Africa and with whom he maintained close links. I offer my own condolences to his fellow priests who will greatly miss him and, of course, to Deacon Seamus who worked so closely and so gently with him. May he rest in peace.