Panama was announced by Pope Francis as the host city of World Youth Day 2019 which will take place from 22-27 January. Following WYD tradition, the Holy Father revealed his choice at the conclusion of the Final Mass in Krakow, the venue for the last World Youth Day in 2016.

The event to be hosted by Panama is expected to be much smaller than previous World Youth Days. Panama is expecting to host about 500,000 pilgrims, significantly fewer than the 2.4 million and 3.7 million pilgrims estimated to have attended WYD Krakow 2016 and Rio 2013, respectively.

The Local Organizing Committee is hard at work planning the many important and interesting events which make up the WYD festivities.

Pope Francis will participate in the upcoming World Youth Day 2019 in Panama. He will arrive at the event a day after it begins and take part from the 23rd to the 27th of January. This will be the third World Youth Day Pope Francis attends. His first took place in Brazil in 2013, just months after his election to the papacy, followed by Poland in 2016.

A number of Irish pilgrims will be present at World Youth Day in Panama including Bishop Donal McKeown, Bishop of Down and Connor.  In this video, Bishop Donal McKeown, shares his hopes for young people and the Church and encourages those unable to travel to get involved in events here at home as well as watching the events live from Panama.

A group of 30 young pilgrims from the Archdiocese of Dublin is making their way to Panama, joining thousands from around the globe for World Youth Day with Pope Francis. The group is made up of young people from Dublin parishes, third level students and several young people from around Ireland and Europe and who live in Dublin.

The Dublin group will arrive in Panama this Friday (18 January). They will all stay with families in a host parish, Parroquia Santiago Apostle. There, along with  groups from Latvia and New Zealand they will take part in a social justice programme with local young parishioners visiting the elderly and housebound and help to  prepare and deliver  food to  families in need in the locality.

On Saturday, six members of the Dublin Group will be taking part in a vital environmental debate Youth for the Common House – Safeguarding of Creation inspired by the Pope Francis’ global message on the environment, Laudato Si.

The Dublin group will also take part in the Opening Ceremony for the arrival of Pope Francis, the Way of the Cross and Vigil and Concluding Mass on Sunday 27 January.

Panama in Dublin will take place in the Emmaus Centre in Swords on Saturday and Sunday (26 and 27 January).  It includes a range of faith led activities. They will also be linking in live to the events in Panama, in particular Pope Francis’ address at the opening ceremony, vigil, and closing Mass. Young people from parishes throughout Dublin will be taking part.

You can keep up to date online with all the events of World Youth Day by following these websites and social media accounts: www.worldyouthday.com and www.vaticannews.va

The official social media accounts for WYD2019 are:

The official hashtag for WYD2019 is #Panama2019. It is likely that an additional hashtag will be adopted for the visit of Pope Francis to World Youth Day. A pope emoji activates when the hashtag #WYD2019 is used!

Shalom World TV has been named by the Archdiocese of Panama to be the Official Media Partner of World Youth Day 2019, giving audiences around the world a chance to participate in the world’s largest spectacular youth event.  The live coverage will include all major WYD events, including those with Pope Francis. It will also feature music bands from various continents performing on several major stages and will cover Faith & Culture exhibits held at more than 15 locations across Panama. Pilgrims from every corner of the globe will participate in catechetical sessions, pilgrimage walks, Stations of the Cross, reconciliation service etc.

Music, dance, plastic arts, cinema, and theater, as well as paint and photography will be instruments of cultural connection for the pilgrims of World Youth Day Panama. Hosted in 33 locations around Panama City, the Youth Festival will engage young people from all over the globe in various expressions of art and culture.

The WYD Local Organizing Committee has published the agenda of the Youth Festival that will happen from 23 – 27 January. There will be seven main stages, each named after one of the Patron Saints of WYD Panama 2019. There will also be satellite stages in shopping malls, as well as presentations in theaters, museums, and in churches serving as adoration centers.

One of the novelties of the Youth Festival program is the “WYD 2019 Cup,” a friendly soccer tournament that will be held Wednesday, January 23rd in Town Center, Costa del Este. The purpose of this soccer encounter is to unite young pilgrims of the world through a sports activity that will be more about cooperating than competing. It is an opportunity to develop good values: teamwork, sportsmanship, effort, respect, honesty, and collaboration.

You call us to live our lives as a way of salvation. Help us to recall the past with gratitude, to embrace the present with courage and to build the future with hope.

Lord Jesus, our friend and brother, thank you for looking upon us with love. Let us listen to your voice as it resonates in the hearts of each one with the strength and light of the Holy Spirit.

Grant us the grace of being a Church that goes forth with vibrant faith and a youthful face to communicate the joy of the Gospel. May we help to build up the kind of society we long for, one where there is fairness and fellowship.

We pray for the Pope and the bishops; for young people; for all those who will take part in World Youth Day in Panama and for those who are preparing to welcome them.

Our Lady of Antigua, Patroness of Panama, help us to pray and live with generosity like yours: “I am the servant of the Lord. May it be done to me according to your word” (Lk 1:38). 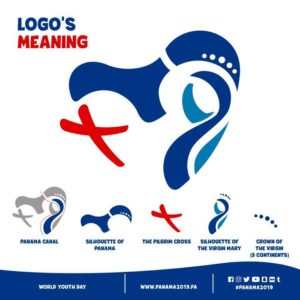 Ambar Calvo, a 20-year old college student at Panamá University, designed the logo for WYD Panamá 2019. Selected from the logo contest convened by Pope Francis, Calvo’s design is rich with Catholic symbolism.
Mary is at the center of the Panamá 2019 logo. The crown of Mary has five points showing the five continents that will send pilgrims to WYD. The Panama Canal stands out in the logo, both representing the host country’s most famous landmark and symbolizing the path of the pilgrim who finds in Mary on the way to meet Jesus. The silhouette of the Panamanian Isthmus is meant to communicate a place of welcome.
The red Pilgrim Cross and the silhouette of the Virgin echo the theme of WYD 2019: “May it be done to me according to your Word”.  The logo’s silhouette has the shape of a heart and the letter ‘M’ to represent Mary as “Bridge of the World, Heart of the Universe,” reminding us that the Blessed Mother is a bridge that leads us to Christ.

In 1984 at the close of the Holy Year of Redemption, over 300,000 young people from around the world responded to the invitation of His Holiness John Paul II for an International Jubilee of youth on Palm Sunday in St. Peter’s square. Looking out to the crowds who answered his invitation he said, “What a fantastic spectacle is presented on this stage by your gathering here today! Who claimed that today’s youth has lost their sense of values? Is it really true that they cannot be counted on?” It was at this gathering that the Holy Father entrusted to the youth what is now known as the World Youth Day Cross, to be carried throughout the world as a symbol of the love of Christ for humanity.

The following Palm Sunday, coinciding with the United Nation’s International Year of the Youth, Our Holy Father took the opportunity to welcome the youth of the world to Rome again. Later, announcing the institution of World Youth Day on December 20, 1985, and the first official WYD was held in 1986.

The following year brought about a new tradition when the second event and first international WYD took place in Buenos Aires, Argentina. Every Palm Sunday has since been designated as a World Youth Day, alternately celebrated at the diocesan and international levels. There have been 12 International World Youth Day celebrations, where the youth continue to answer the invitation of the Holy Father in staggering numbers and carry home the message received there to be Christ’s light to the world. While these events are organized by the clergy and laity of the Catholic Church, youth of all faiths are invited to attend and encounter Christ, making this gathering truly universal.

In Toronto, the last International WYD in which JPII was present he told the 800,000 gathered with him at the vigil, “When, back in 1985, I wanted to start the World Youth Days… I imagined a powerful moment in which the young people of the world could meet Christ, who is eternally young, and could learn from him how to be bearers of the Gospel to other young people. This evening, together with you, I praise God and give thanks to him for the gift bestowed on the Church through the World Youth Days. Millions of young people have taken part, and as a result have become better and more committed Christian witnesses.”

John Paul II left a legacy for the youth in his institution of World Youth Day, which Pope Benedict XVI has faithfully continued, carrying on the hope of His predecessor for the youth of the world, inviting them and commissioning them as Christ’s disciples to be faithful living witnesses.

With thanks to the Catholic Communications Office of the Irish Catholic Bishops’ Conference for this article and resources.